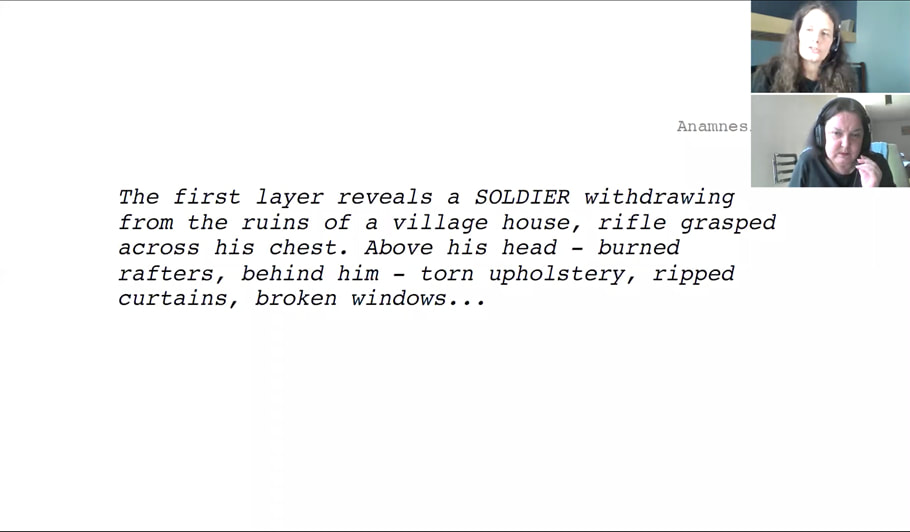 By Cathy O’Carroll, Performed by Cathy O’Carroll and Jeanette Doyle
​
In a performance script, stage directions introduce each scene, fixing its locality, providing for the technicity of the dream. They shape the production of a space oriented by the script but open to interpretation, re-invention and re-performance. Anamnesis is conceived as a first reading of an improbable and unrealisable script constituted by multiple layers of these scenographic stage directions.
​
Cathy O’Carroll is a Dublin based, theatre and performance lighting designer whose work engages with a wide variety of performances locally and internationally. Her expanded practice, uses experimental proceesses in forms such as written text and scenographic performance, to interrogate the interactive potential of scenography.  Current artistic research explores the constitutive role of performance technologies; focusing  on the interrelation of scenography, techné and practices of the ‘amateur’. With artist researchers Mick O’Hara, Connell Vaughan and Jeanette Doyle, she is a core member of the ‘Aesthetics Research Group,’ whose creative practice centres on collaborative writing and pedagogical performance.

Jeanette Doyle is an artist, curator and writer. She is a Fiosraigh scholar at the Graduate School for Creative Arts and Media (GradCAM), Dublin.

Anamnesis from Cathy O'Carroll on Vimeo.

C:
The first layer reveals a soldier withdrawing from the ruins of a village house, rifle grasped across the chest, above his head - burned rafters, behind him - torn upholstery, ripped curtains, broken windows...

This first section of the work – during which the audience are observers rather than participants - emphasises processes of the state mediation of memory.

J:
The next layer is a structuring rhythm. Even, pounding, with syncopated base – a structure of light and sound. The sound – barely perceptible – issues from a base bin in the auditorium – a throb, a pulse a heartbeat. The light, becomes a trail passing from object to object, each illuminated momentarily before the last is extinguished and holding a moment before the next dawns slowly to light...

C:
The third layer is a story – of a small child and a wild storm. It begins in a cheap hotel in Athens – ‘The Paradise’ – and ends with a massive wedding party in the ‘Penthouse Bar’ -  Ballymun.

J:
The 4th layer is a building of red brick walls and pointed corridors and ugly single glazed windows, overlooking a grimy yard surrounded by a 6ft high concrete wall. Behind the wall is a forest – but that can’t be seen - and behind the forest an angry beach, a wild sea, a foreboding sky, and a ship – waiting in the darkness.

C:
The fith layer is a mystery of faith – depending on belief – a holy trinity of body, spirit and cognition. Continually reproducing each other - one from the other, all from one - in an endless cycle of death, rebirth, transformation, whirring clicks and silence.

J:
The sixth is a commercial pandering to an audience too unlettered to understand fine poetry, too weary to expend energy on deciphering clever conceits.

C:
The final is a feeling – or a smell - of earth, warmth, deep energy. Mud smeared on the walls – ground into carpets – warm winds blowing through the rafters, rustling the curtains. The moon rising over the gaping roof, glinting off the broken glass. The smell of dried blood, earth, growth – spring time - as the  world begins anew.