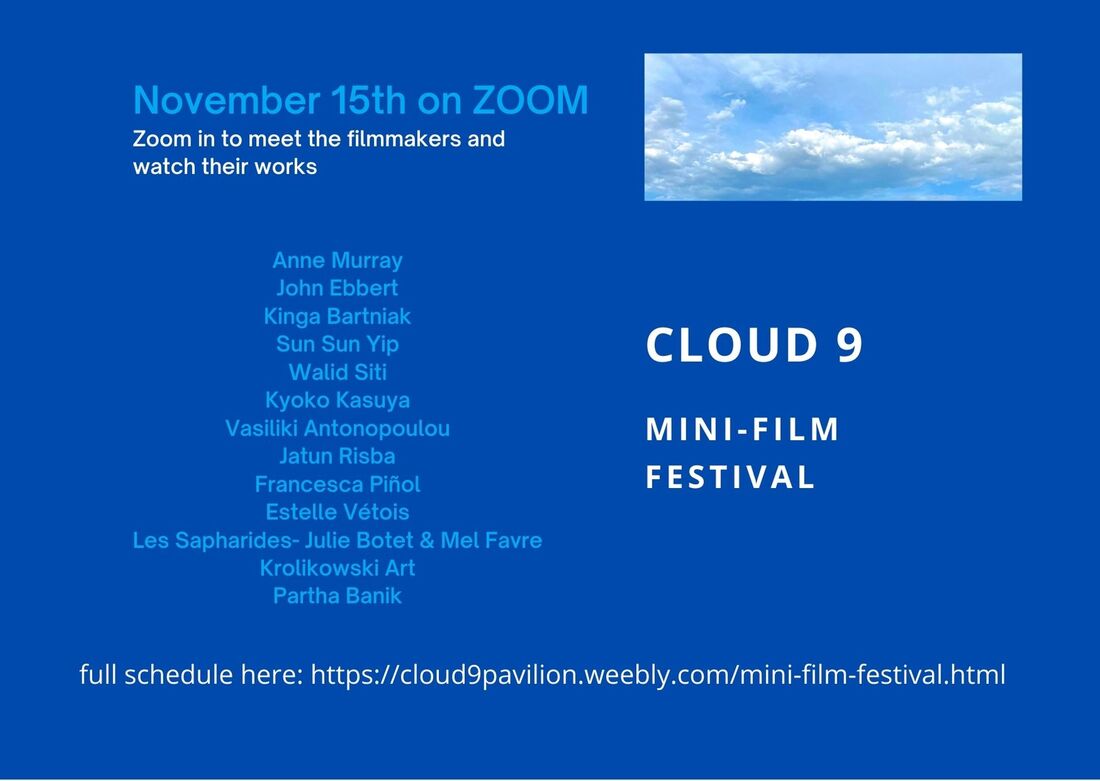 The works here, some of which are available in their entirety, while others only as trailers on this page, were shown in our mini-film festival on November 15th by the filmmakers on ZOOM. These artists presented some other works, even beyond film and video, to bring context to the works presented here. The artists also discussed them with the ZOOM visitors and answered questions about their process, conceptual goals, and the broader intentions and outcomes of their work. It was an amazing day of artistic exchange and conversation.

Here, it is the artists who introduce their works in their own words.
Serenity by Krolikowski Art
​2020
Analog video
Two channel video installation

What do we, people of the 21st century, know about serenity?

Our eyes are the hostages of social media attention, our minds are engaged in social games, our hearts are captured by the rules and morals. We have built civilization, developed the technologies and… we are turned out to the prisoners of our own development.

In the past we were all-in-one. People and nature were a united organism, self-sufficient, and harmonic. However, our intention to create our own Universe separated us from the rejoice of living in the whole-in-one syncretic world. Individual ego and wish to rule the world replaced the indissoluble connection with the collective subconscious and nature. We got the fire and decided that we are the gods.
But still, in the same way as we came to this planet's surface from the water, our individual mind is also formed from the ocean of collective memory and subconscious. So honoring water as the very first source of life we get connected to the depth of our own nature.

A female hand playing with the sun reflects underwater depicts not just an image of individuality but also resends on the creator’s will. Her will is not to change the course of the river, but just to be its embedded part. Acting like a child, with no intention to interfere or conquer, we can dissolve our ego and ambitions in order to enter a state of serenity.

The Dusk from Partha Banik on Vimeo.

The Dusk by Partha Banik

A land in Tripura, shares the border with Bangladesh by three sides.
Long ago, in various times, migrants of nearby places have come on the shoreline of the river Gomati and gradually they created a colony, called Sonamura. They were no longer migrants, rather they own that land. In that land, they farm, they love, they quarrel, they even talk about things secretly and peep into each other's lives, but there comes a time when everyone forgets everything and prays together for a ‘better tomorrow and life for all’ and the evening comes and life goes on…

d'aquarium from Anne Murray on Vimeo.

...d'aquarium by Anne Murray
​
I read something about how humans personify non human things when they are lonely. I am doing something different. Rather than projecting human traits onto the "beings" in my environment, I try to take on their traits. I perform exercises in feeling and moving, being like a plant, like an octopus, I try to see how their experiences are each day, the way they move slowly and have to adapt if anything disturbs them.  I spend my days often staring for a long time at them and thinking. My work ...d'aquarium is a reference to this experience of connecting to what it must be like to be an octopus wondering how does it take in information, how does it understand the things around it? I chose to be an octopus because I spent my time during the Covid-19 lockdown reading a book about how the octopus became one of the most intelligent and sensitive beings that lives only a short life of about two years. The book is entitled, Other Minds: The Octopus and the Evolution of Intelligent Life by Peter Godfrey-Smith.

I create an object from a mental image. I place it exactly at the center of a space as I remember it. Then, as I look at it,
​I see another object appear in another space...this is the beginning of an endless trip.
WHITE SILENCE by Francesca Piñol

Two aspects have always inspired my fascination for the Arctic: color and sound.  Ever since first learning about the Inuit people, I have been captivated by the sheer number of names that they have for the color white, which changes depending on the quality of any given day’s fallen snow.  And the sounds above all, the Arctic’s characteristic silence, which allows those who experience it to tune into the earth’s most primordial sounds.

The Arctic: a place where nature has remained in an authentic, powerful, and pure state, where sky and earth meet, where the silent force of possibility reveals itself, a place where aesthetic manifestations of sound and color reach an awe-inspiring intensity, a place that transports the viewer to the border between heaven and earth, and where the artistic gaze can bring this reality to life.

The Arctic: white silence that shows the way towards one’s own inner landscapes.

Action: WEAVING SPACES: THE ARCTIC WHITE SILENCE
In front of the Juli Bukta glacier, the yarns dyed with seaweed are woven, each color a ribbon.
On the arctic beach they move with the water, play, listen to the sound of the ocean and the glacier.

The cracks come to materialize this border surface, this silent medium that we want, that we must forget, the screen. Last tangible zone before digital space. Tutorial: Repairing a screen brings to light a world where everything is damaged too quickly, that of obsolescence. Thanks to the screenshot, it is a question of bringing to the gaze a process: from parasitic fractures to a moving abstract constellation. Absurd process? The presence of the gesture, of the hand, is here reduced to the simple hazardous aspect of the lines around the breaks and to the sounds of mouse clicks. Tutorial: Repairing a screen is therefore an invitation to observe a change of state. Change of state which makes repair and disappearance of the image coincide. The repaired state is a black screen. A tutorial to show the image being undone. Symptom of a reality in the process of slipping away?

​From the wear and tear of stone steps to the etchings of a teenager on a brick surface, Architecture can be read as an archive of human experience. Once replaced with glass, these histories become erased. ‘Dry’ uses coastal processes as metaphor to speak about ‘change’ and tries to navigate a ‘post evental’ space.

Idea of the Ocean from Kinga Bartniak on Vimeo.

Idea of the Ocean by Kinga Bartniak

​The idea of the Ocean video, 7:20 passports, prints, silver stones, wood, plottered golden schemes and questions, bowl, an app with image recognition Is aggression necessary? There is an intriguing but trivial relation between the object and force in the Ocean that shapes it. That phenomenon can be understood as normalization - the substance is being polished to remove harsh leftovers. Is normalization - the process that clears out excessive data - positive or negative? That form of worldview distorting factors is capable of turning the natural need for rivalry into destructive aggression.

Does the lack of respect have the healing power?
Did flood as a punishment occur for the same sins on the whole world?
Why sailing is not always possible in the straight direction?

Listen to the voices of the sea TEASER from Kyoko KASUYA on Vimeo.

Listen to the voices of the sea, short film,  5'43,  Full HD,  2019
by Kyoko Kasuya
​
This is an initial experimental short film based on an extract of the diary of Hachiro Sasaki, a former Japanese student at the university of Tokyo who became a Kamikaze during the Pacific War. His diary was published in a collection of writings by Japanese soldiers, under the title Kiké Wadatsumi no Koé (Listen to the Voices from the Sea) in 1949. I found it interesting to transfer this story to the territory of France so as to contribute to a better mutual understanding of how a man, confronted by the reality of war, while struggling against his own destiny, ends up by accepting it. Today, the memory and humanity of these Japanese soldiers seems to me to require a work of enlightenment and memorial amendment.

ONENESS from Walid Siti on Vimeo.

In this short video, Oneness 2020, Walid Siti installs a sculpture in his garden, focusing on shifts and rethinking the centres and sources of power.
​
Siti says “A year ago I was given a few bags of wood off cuts leftover from a job. They were solid oak in rectangular shape. I had in mind a use for them in creating something in our garden. Then the Covid-19 pandemic and lockdown came along. A situation that affected all of us to the core. The threat to humanity but more to the centres of power, states and institutions. It refocused and emphasised the importance of nature and sciences as well as the role of the marginalised.”

“Entirely made out of recycled natural materials, inspired by nature and again installed into nature.
The simple shape of helix as an art piece is a tribute to nature and sciences and to those undermined human resources and foundations.”
Love & War Carousel by John Ebbert

Drawings of things are lies. Photos are too. The trope of 20th Century Modern Art was built upon the destruction of two-dimensional illusionistic space. Then, some people got over that, and Art turned into the anything goes world that it is now.

That’s not what these Love & War drawings are about.
​
Love & War Carousel is about perception. It (they) is/are about the ability to determine if or when a representation can be understood as a lie. (Seems a fitting subject these days.)
​
Setting aside the Love & War theme—that’s another discussion—I’d like to talk about how these drawings were constructed to create a visual lie.

It is a space of suspension and a gestation. The latter, by biological definition, is cyclical and has an end.
It is ephemeral. It must take its time. It is a primordial period, like the mother who bears the child.
The end result does not always happen, but the quest remains intact and the visceral struggle.